GUIDANCE FOR RESTAURATEURS TO GET IN COMPLIANCE

The 2010 Patient Protection and Affordable Care Act (PPACA) Section 4205 establishes national menu labeling requirements for specified classes of restaurants and vending machines. As a result, nutritional disclosure and response to nutritional concerns are among the most important issues for the restaurant industry to address.

Eddie left his doctor’s office with strict advice to watch what he eats.  He had never seen any calorie or nutritional information provided by his favorite go-to restaurants.  Eddie thought to himself, “Wouldn’t it be great if I knew how many calories I was eating?  I wish all my favorite restaurants would publish this info on their menus so I know how much I should order!”

Fortunately for Eddie and many others alike, in 2014, new menu labeling requirements set by the US federal government mandate all restaurant chains more than 20 locations post nutritional information for standard menu items where customers may be more likely to see it -on their menus or menu boards. Total calories, fat, saturated fat, cholesterol, sodium, total carbohydrates, sugars, fiber and total protein will also have to be made available in writing upon request.

Public health studies are beginning to show that menu labeling may influence consumers to choose menu items with a lower number of calories. In 2007, the New York City Department of Health and Mental Hygiene commenced a study on the Purchasing Behavior and Calorie Information at Fast-Food Chains in New York City1.  According to the British Medical Journal’s release of the findings in July 2011, New Yorkers who bought lunch at several major fast food chains used posted menu calorie counts to make lower calorie choices. National public opinion polls show that up to 83 percent of Americans favor menu labeling!

New menu legislation creates new concerns for restaurant owners worried about not being in compliance. Communicating information accurately and in a timely manner will be more important now than ever before. Digital menu systems, such as the Insight® line of solutions from Delphi Display Systems, boast product-centric menu creation and management tools that easily allow the restaurant operator to maintain consistency in distributing calorie, ingredient, and other nutritional information to each catalog/menu item. A key benefit of using a digital menu system is the ability to make system-wide changes; whether an ingredient change is for one restaurant or a thousand locations, it can be made once from a single computer or tablet. 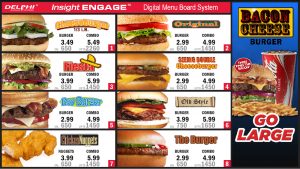 INDOOR DIGITAL MENU BOARD WITH CALORIES

What information is important to my guests?

Society has become more health conscious and increasingly millions of Americans have dietary restrictions. People with sensitivities or allergies are pretty good at asking restaurants about which food elements are being used almost all the time to make sure, but there is a large degree of assumption in many dishes. Often, front-end restaurant workers will not know what ingredients have gone into the preparation of a meal. As a food service provider, nutritional analysis of menu items can not only help consumers make more conscious decisions, but also create a more knowledgeable crew who otherwise could not advise guests accurately. This practice has the potential of creating increased customer loyalty, a staff empowered by transparency, and a better-quality dining experience for the consumer.

Researchers estimate that up to 15 million Americans have food allergies. There is no cure for food allergies; therefore, complete and strict avoidance of certain foods is the only way to prevent reactions. Every 3 minutes, a food allergy reaction sends someone to the emergency room – that is more than 200,000 emergency department visits per year.
These 8 foods cause 90% of allergic reactions in the United States2:

Approximately 18 million people have gluten sensitivity by which the ingestion of gluten can cause gas, bloating, diarrhea, constipation, fatigue, depression, and joint pain.  The only treatment is to follow a gluten-free diet.  Unfortunately, some people have an even more severe condition. Celiac Disease is a genetic, autoimmune disorder by which the consumption of gluten causes damage to the small intestine, resulting in non-absorption of nutrients, and possible weight loss, diarrhea, constipation, vitamin and mineral deficiencies, anemia and bone disease. The only treatment is to follow a strict gluten free diet by avoiding wheat, barley, and rye.

Pork is restricted in both Jewish and Muslim dietary laws. The cow is considered holy in the Hindu religion, and therefore, the consumption of beef is considered a grave sin and must be strictly avoided. Vegetarians do not eat any animals. This includes pigs, chickens, cows, sea animals, and every other animal. In addition to not consuming any animal flesh, a vegan (strict vegetarian) also doesn’t eat dairy products, eggs, or any other product derived from an animal. Vegans also avoid using products that have been tested on animals or made from animal skins. For vegetarians and vegans alike, dietary beliefs have clear distinctions, cannot be compromised, and should be treated in the same regard.

The more Eddie looked for nutritional information to match up with his doctor’s recommended dietary plan, the more he realized he needed help and information from his local eateries.

Next Week: New Menu Labeling Requirements – Pt2: “What are the best ways to inform my customers?”